Public Health Emergency in the ACT

A Public Health Emergency has been declared in the ACT for the response to the COVID-19 pandemic. Read more

On 11 September 2020, the ACT Government assumed a Caretaker role, with an election to be held 17 October 2020. Information on this website will be published in accordance with the Guidance on Caretaker Conventions until after the election and conclusion of the caretaker period. 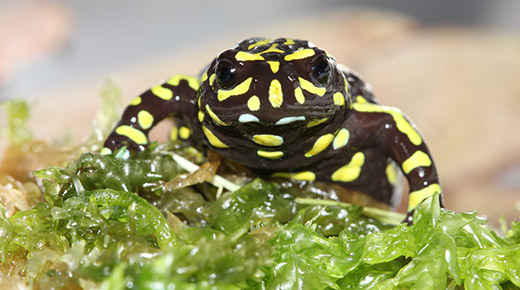 Northern Corroboree Frogs are brightly coloured with yellow and black patterning. They are a small frog, getting to only 3cm in length and live in sub-alpine woodlands and tall heathlands. Once common, they are now listed as Critically Endangered.

One of the greatest threats to Corroboree Frogs is Chytrid fungus (Batrachochytrium dendrobatidis). Chytrid fungus is a water borne pathogen which attacks the keratin in frogs’ skin, slowly killing them. Some species of frogs are able to carry the pathogen and survive, unfortunately spreading it to others that are susceptible. Other threats include damage to breeding sites by introduced hoofed animals, changed fire regimes and climate change. The 2003 Canberra fires had a devastating effect on the population.

Tidbinbilla houses the largest captive breeding population for the Critically Endangered Northern Corroboree Frog (NCF), with only hundreds left in the wild. Around 250 eggs were collected from the wild in 2003 to establish the program and the adults from these eggs became the primary breeders. The first successful breeding occurred in 2012 after those individuals reached maturity.

ACT Parks and Conservation Service staff have released over 2000 individuals to help boost wild populations. It is hoped that release efforts will allow breeding populations to persist in the wild and allow them to develop resistance to the chytrid fungus pathogen. Mature males that were captive and released have been heard calling at release sites in the wild, demonstrating that there are some surviving into adulthood in the presence of chytrid.

The ACT Parks and Conservation Service partners with Healesville Sanctuary - ZoosVictoria, Taronga zoo, and researchers from the Australian National University.