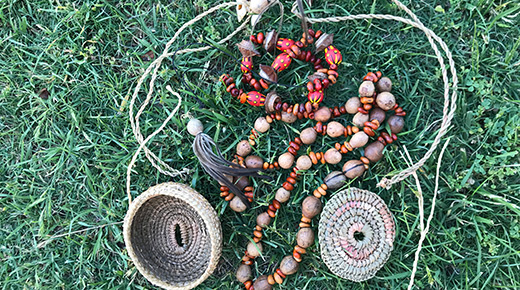 Tidbinbilla is a place of historical and ongoing significance to the Ngunnawal people. The Ngunnawal people are the Traditional Custodians of the Canberra region with a continued cultural, spiritual and historical connection to the area. Evidence of Ngunnawal occupation of the Canberra region stretches back over tens of thousands of years where cultural, social, environmental, spiritual and economic connection to these lands and waters has been maintained in a tangible and intangible manner.

Over the years it is acknowledged that some areas around the region have more significance and value than others. One of these is the Tidbinbilla valley where rock shelters were used dating back as far as the last Ice Age.

An ongoing connection to Country

The name ‘Tidbinbilla’ comes from the Ngunnawal word ‘Jedbinbilla’ which means ‘where boys become men’, identifying the special relationship Ngunnawal men have to the valley and its use for ceremonies and passing on of traditional customary men’s lore/law.

As traditional custodians of this land, the Ngunnawal people have lived and gathered in the valley and its surrounding mountains since time immemorial.

Ngunnawal people maintained and used the valley for various purposes such as a gathering place and a place to source food including the migratory bogong moths. The Ngunnawal custodianship and connection to Country continues strongly today.

The valley made a perfect settlement area for Ngunnawal people as it provided a haven of resources with a central river fed by the high peaks of the valley catchment. The Tidbinbilla valley also had many natural grasslands which made a perfect hunting ground along with many rock shelters scattered throughout.

Men’s sites were often found in the higher peaks of the valley. One of the Rock shelters is home to ancient rock art found along a pathway to the Gibraltar rock peak which is a men’s site.

While the mountains in Tidbinbilla are also important to Ngunnawal women, women’s sites were found closer to the river system that twisted through the valley. In some women’s places grinding grooves can still be found on the river’s edge.

To the Ngunnawal people, knowledge of history is not only embedded in archaeological finds, it is also preserved within the landscape through oral traditional stories, dance, memory, ceremony, artistic depictions found in rock art sites.

Cultural landscapes refer to the mountains, waterholes, rivers, caves, rock formations, flora, fauna, wind and air, that is the interconnected web of these elements expressed by customary traditions.

Often grand geological formations would be significant to the story of place. Many formations can still be seen today which visually reflect the dreaming story of the valley and its important relationship to the people that have survived and thrived within it for thousands of years. An example of this is the shape of a pregnant woman seen through the contours in the western slopes of the valley and found in the centre of the Tidbinbilla valley is a rock that looks like a perched eagle (Maliyan) the creator spirit of the Tidbinbilla dreaming story.

A place of shelter during the Ice Age

Tidbinbilla provides visitors with a unique opportunity to picture the long and ongoing connection of Ngunnawal people with the land and local flora and fauna.

The Birrigai Rock Shelter is one of the oldest known inhabited rock shelters in the world, and shows Aboriginal use of shelters during the last Ice Age dating back over 25,000 years to a time when temperatures were 8-10°C colder than they are now and when snow covered the ground for almost half the year.

A place of ceremony and gathering

Tidbinbilla was a key place for Ngunnawal ceremonies, with groups from surrounding areas entering through key points such as Gibraltar Rocks, where an elder would light a fire to guide people into the valley. Neighbouring language groups travelled to Ngunnawal Country for the purpose of ceremony, Lore, marriage arrangements, trade, sharing of seasonal foods and cultural knowledge.

Tidbinbilla was also a place where young men learnt traditional lore/law, and where they were taken into the mountains as they learnt to become men in the traditional way. Similarly, Ngunnawal women carried out their customary ceremonies in the lower areas of the landscape preparing young girls for womanhood.

The mountains surrounding the valley were home in spring to the migrating bogong moths, which were gathered by Ngunnawal people as a source of food.

The Ngunnawal connection to Tidbinbilla continues today having direct benefits to the health and wellbeing of their community. Working on land management projects providing Ngunnawal people with a sense of personal pride, it also affirms their identity of cultural belonging and connection to the land on which they live. Visitors have unique opportunities to learn about culture and history by participating in cultural tours with a local Ngunnawal Traditional Custodian.